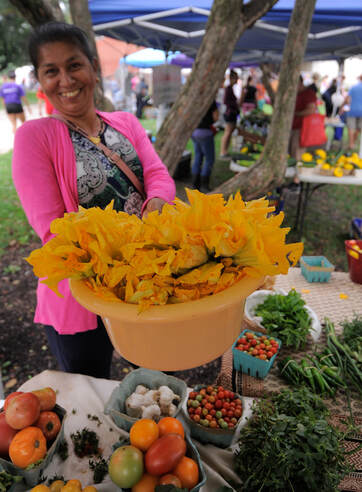 Photo courtesy of Paul Bick, Field Museum
In 2012, 42 refugee families from Burma and Bhutan, many with three generations working together, turned a vacant lot into a productive garden and began growing fresh, organic vegetables for home consumption and sale. One half-acre of planting beds produced nearly 5,000 pounds of vegetables for home consumption and another 1,500 pounds of farm produce was sold, generating over $3,000 in earnings for the farmers in 2012. Today, the farmers collectively generate over five times that amount. They harvest fresh ingredients for traditional recipes, learn about urban commercial vegetable production in a cold climate, and earn supplemental income through sale of produce to local businesses.

Our farm runs a CSA each year from June to September and participates in various farmers markets around the city. Not only do we provide vegetable plots for over 100 refugee families, but we also have several beehives on site which are managed by volunteers. In addition to CSA and farmers markets, our produce can also be found at several restaurants and food pantries around Chicagoland.

By providing land, tools, seed and training, this project builds on the traditional strengths of refugees from rural backgrounds to create food security and economic opportunity in their new home. Many refugees have fled persecution and war and encounter new struggles when arriving in the United States, from language barriers to difficulty finding employment. Refugees at Global Garden-- many of whom farmed in their homeland-- are able to connect with their past lives as farmers as well as other refugees and do what they do best: grow food.​